Authorities in Austria made a first arrest on Tuesday in the corruption probe that led Sebastian Kurz to resign as chancellor, media reported.

Public prosecutors are investigating the former chancellor and nine others on suspicion of embezzlement, bribery and corruption.

According to the daily paper Der Standard and Austria’s APA news agency, the person arrested Tuesday was a pollster who was under investigation for her role in the scandal. She is reportedly accused of deleting data from the hard disk of her computer shortly before a raid.

What is the scandal about?

Kurz, 35, and his allies are suspected of using state money to pay for fake opinion polls and positive media coverage from 2016, when Kurz was foreign minister and seeking to become leader of the People’s Party (ÖVP).

Payments were reportedly made to a tabloid in return for publishing the polls.

Kurz, who went on to win in 2017, has denied wrongdoing. Last week, investigators raided several locations linked to his ruling ÖVP over the allegations.

According to prosecutors, the losses to the public purse amount to “at least €300,000 ($347,000).” If convicted, the people being investigated could face lengthy jail terms.

Kurz stepped down as chancellor on Saturday following growing pressure from the Greens, the ÖVP’s junior coalition partner. Close ally and longtime diplomat Alexander Schallenberg was sworn in as his successor on Monday.

During a debate in Parliament about the corruption allegations on Tuesday, Schallenberg defended Kurz and said he would continue to work closely with him. At the same time, opposition activists outside the building mocked the new chancellor as Kurz’s puppet. 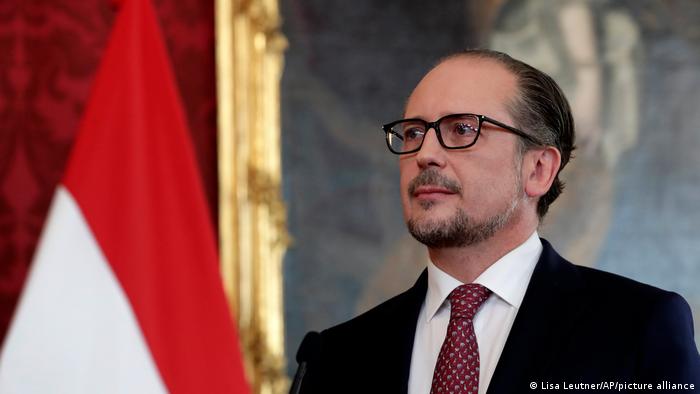 Opposition parties have urged Alexander Schallenberg to distance himself from Kurz

The opposition Social Democrats (SPÖ) called on Schallenberg to make a clean break with Kurz’s conservative allies who are facing charges of corruption.

The far-right Freedom Party (FPÖ) and the laissez-faire Neos have demanded more transparency in the allocation of government advertisements to the media.

Although Kurz is no longer chancellor, he remains head of the ÖVP and is now also the party’s top lawmaker in parliament.

Kurz did not attend Tuesday’s debate.